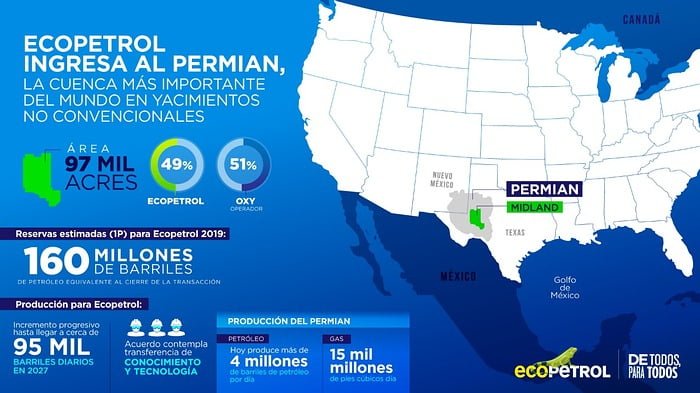 Ecopetrol S.A. formed a joint venture (JV) with the American Occidental Petroleum Corp. in order to develop Fracking in the Midland of the Permian Basin in the state of Texas (USA) in the Permian basin, recognized as the largest hydrocarbon production in the world and one of the global focuses of the oil industry for the development of the YNC. (fracking)

In line with the strategic priorities of the 2019-2021 business plan, Ecopetrol focuses on “the growth of reserves and production under a strict capital discipline and which is supported in exploration, recovery, YNC and internationalization”.

The closing of the transaction, allows the Ecopetrol an increase of about 10 compared to the proven reserves of 2018, with the incorporation of 160 million barrels of equivalent oil (mboed) under fracking technology and the increase in production in a way progressive until 2027, when net production for Ecopetrol would be achieved in the JV estimated at about 95 thousand barrels equivalent per day (kbped).

The alliance represents for the Colombian Petroleum a strong component of knowledge transfer and fracking technology since the staff of the Colombian company will participate directly in the activities in the country that has developed the most successful.

OXY with the 51, will bring its experience as an operator and about 97,000 acres to be developed in an area with high hydrocarbon potential in the Midland del Permian. For its part, Ecopetrol will have a 49 participation and is linked to a down payment of 50 at the close of the transaction and 50 in carrying (deferred investment over time in activities covered by the development plan). During the carry-on period, Ecopetrol will pay 75 of Occidental’s share of JV investments. With a total equivalent investment of US$1.5 billion

For its part, Ecopetrol Permian LLC, incorporated and in compliance with the regulations of the State of Delaware, is 100 owned by Ecopetrol USA Incorporated and by indirect means of Ecopetrol S.A. in the same percentage. Its economic activity will be oriented towards the exploration, development and production of YNC.

“The operation is aligned with the company’s capital discipline by positively impacting the ROACE (return on capital used), continuing with the planned organic and inorganic investments, and will be carried out with own resources, without the need for resort to borrowing,” Ecopetrol said.

He concluded by saying that the transaction is subject to regulatory approvals in the United States.